Growing up in the Chesapeake Bay Watershed, it became a staple in many of the locals’ lives. From swimming at the local beaches and boating the waters to eating the delicious seafood it is known for, my love for the Bay developed from more than the fun memories. It was one of the main topics of discussion in every science class in elementary school, and an anticipated field trip. Going there we learned about the environment and community efforts to keep the Bay clean.  Putting on waterproof boots and going in the stream looking for clams, oysters, and rockfish is a core memory for many of my age group. As I grew older and got busier with life, my love for the Bay was forgotten for a time. And, unfortunately, it appears that had been the case for many others.  The Chesapeake Bay Watershed had become severely damaged by a process called eutrophication. Throughout my research I realized that while efforts have been made to help the Bay specifically, many other local water systems are impacted by this phenomenon. Throughout this paper I will discuss what eutrophication is, the causes, and policy recommendations.

Eutrophication is a process that has been occurring naturally and slowly for years, but as human presence has increased, the process has rapidly progressed.  Eutrophication occurs as a body of water gets exposed to excess nutrients, specifically Nitrogen and Phosphorus, which creates an overproduction of algae. This overproduction of algae creates a thick layer on top of the water, called an algal bloom (pictured below).  This algal bloom becomes so thick that it blocks the sunlight from entering the water, disrupting the important process of photosynthesis for the plants at the bottom of the water.  Since the process of photosynthesis was disrupted, the plants are no longer able to produce oxygen for the living bacteria and organisms in the water, and all living things eventually die.  If not handled early in the process, it can be near impossible to reverse the effect of Eutrophication. 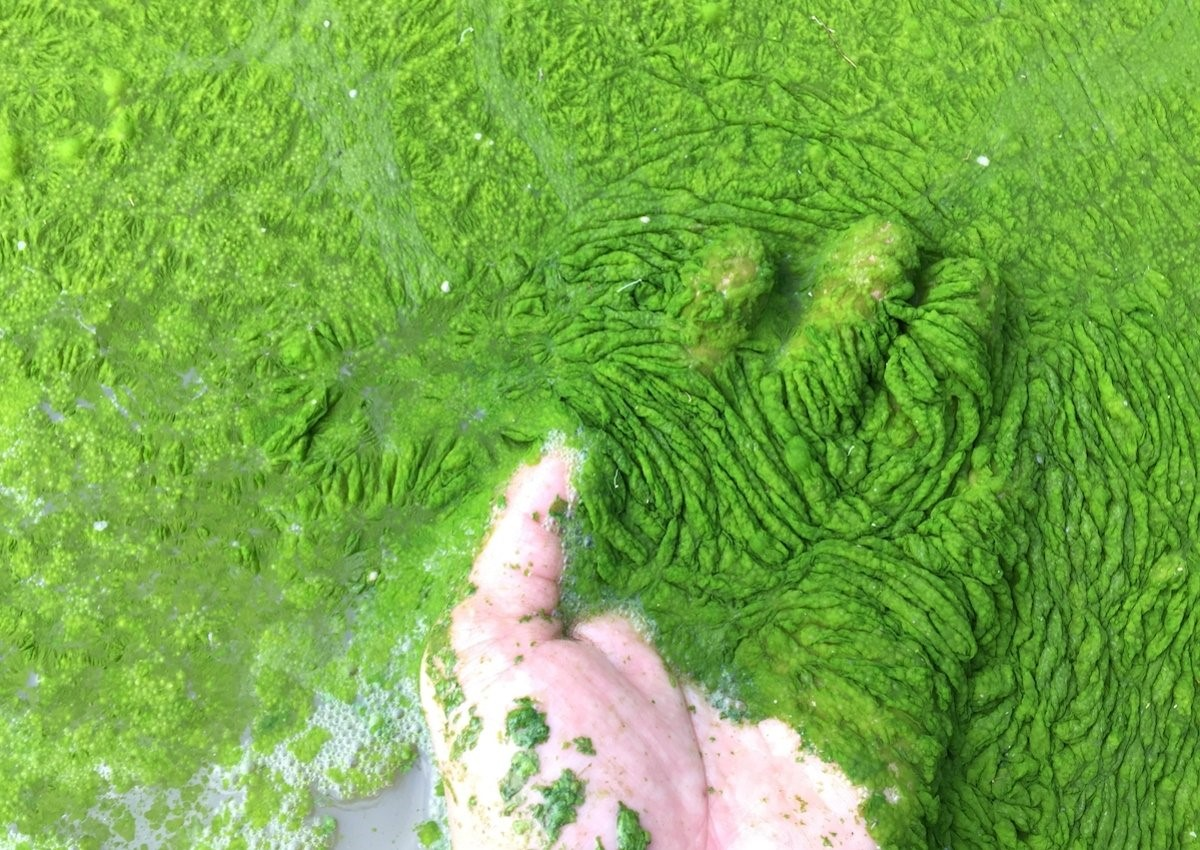 Eutrophication is a natural process, but human interaction has caused an extreme progression in the process. Listed below are a few specific, human-related causes of this phenomenon.

The three main sources of nutrient output are:

Point source pollution is the ‘direct’ type of pollution.  Wastewater, whether it comes from the home or industries, schools, or individual companies, contributes highly to eutrophication.  Improper disposal of human sewage and industries such as “pulp and paper mills, food and meat processing, agro-industries, and direct discharge of sewage from maritime vessels are some of the larger sources of industrial nutrient pollution” (WRI, n.d.).  The everyday household also significantly contributes to America’s eutrophication systems. A study on a detergents effect on eutrophication found “out of 36 detergents studied, certain detergents effectively promoted the growth of duckweeds even in low concentration” (Ansari, 2014).  As well as detergents, septic systems have a large influence on eutrophication as well. Septic systems are designed to clean waste by pushing it through the soil. “They leach, on average, 14 kilograms of nitrogen per system per year—much of which reaches groundwater or nearby surface waters” (Ann Arundel County Maryland DPW 2008). Fish farming, or aquaculture, is another growing source of point source pollution. “These farms generate concentrated amounts of nitrogen and phosphorus from excrement, uneaten food, and other organic waste. If improperly managed, aquaculture operations can have severe impacts on aquatic ecosystems as nutrient wastes are discharged directly into the surrounding waters. For every ton of fish, aquaculture operations produce between 42 and 66 kilograms of nitrogen waste and between 7.2 and 10.5 kilograms of phosphorus waste” (Strain and Hargrave 2005).

Nonpoint source pollution is the ‘indirect’ type of pollution. While ‘indirect’ may suggest a lesser effect, it makes up 2/3rds of the three main sources for nutrient output. As agriculture is one of the biggest industries in America, it makes sense that they’d do everything they can to maintain production of good crops. A huge part of that is fertilizers. They can do incredible things for soil and food production, but it can be very harmful to surrounding waters.  When crops are watered or rainfall occurs, runoff can carry this nutrient rich fertilizer to the body of water, creating an excess and beginning or continuing the process of eutrophication. Atmospheric deposition, the second main non point source for nutrient output, is slightly more complicated. When things like fossil fuels are burned, they release nitrogen oxides into the air. These nitrogen oxides are then redeposited to land and water through rain and snow. Again, creating an excess and beginning or continuing the process of eutrophication.

While it seems like many of these sources are uncontrollable, there are several things policymakers can do in order to lower the effects. Keeping these causes in mind, below are policy recommendations to combat the issue.

Listed below are policy recommendations that have a strong influence from the World Resources Institute, or WRI. Policies will be defined and will show examples of similar policies if applicable.

Living in the Chesapeake Bay area, eutrophication is an issue close to my heart. I’ve seen the effects of it and continue to today. While the Bay thankfully has a plan to be restored, I worry for the other beautiful bodies of water that are at risk.  Whether it’s a natural river or a man-made pond, all waters can be subjected to the effects of eutrophication. Eutrophication is an extremely confusing, time-sensitive problem that policymakers need to consider.  The source of it can be hard to identify, and without proper research it’s difficult to determine if an area is being affected until it’s too late.  This process deteriorates lakes, rivers, streams, and all other bodies of water.  Not only is it an eyesore, but it creates dead zones that can be irreversible if it goes untreated too long. Not only are our beautiful bodies of water in danger, but so are the local clams, oysters, and fish we love.  Following the policy suggestions listed above while keeping in mind the background of the issues and the causes along with it is key to reversing this phenomenon.  Policy makers need to start this process to reverse the effects soon, or else it may be too late.